Nothing to hide behind the milk price

To claim that the Canadian Dairy Commission (CDC) hides how it calculates the production costs of milk is false. The entire methodology is published on the CDC website; One simply has to take the time to consult the documents, specifically, the cost of production report.

The price increases confirmed for 2022 are calculated on the cost of production figures for 2020 and not for 2021 as they are yet to be finalised.

In August 2021, the costs had already increased by an average of 9.58% if we look at the CCL table below, which means that the 10.9% increase for 2022 is justified. It serves no one to pretend or assert otherwise.

The figures in this table are not indexed nor do they consider inflation and the consumer price index. It can be expected that the average of the increases will be higher once the numbers are final.

The referenced CDC document indicates that the cost of labor decreased in 2020. This is explained by the lack of labor in the dairy industry as is the case elsewhere in agriculture and many other sectors. Let’s not forget that events from March 2020 onward are a far cry from the normalcy we have been used to. It is not a cost reduction that should be considered an asset, it is not just investments in technology that have reduced labor costs. The employment of foreign workers does not even meet the need for labor in agriculture. 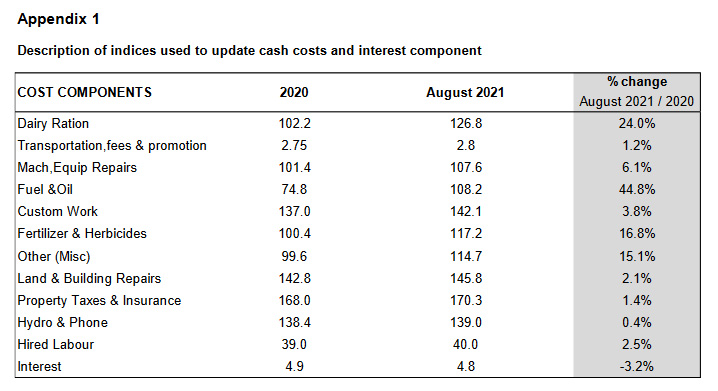 There are a few farms that work with approximately 2 people caring for the cows; however, most producers also work in the fields to grow food for the animals. Dairy production is not only happening in the barn it’s in the field as well.

Moreover, producers have restrained their investments in 2021 because of pandemic-related instability, so we can expect this budget item to be further reduced for 2021.

Speaking of technology, let’s not forget that dairy robots must be cleaned, repaired, and programmed. Cows are complex mammals that have lived with humans for too long to abandon them to robots! There will always be people working with cows, relying solely on robots would be reckless, even irresponsible.

To assert that the reduction in the number of small farms in favor of large farms results in reduced production costs which in turn should lead to a decrease in prices for the consumer is too simplistic. Dairy production has changed since the 1970s and although large-scale production can lead to lower costs under the same conditions, this again is too narrow a viewpoint.

Investment in farms and farming techniques are now far greater and take longer to pay for themselves. You might think that only the big farms west of Toronto are profitable, but that’s simply not true. Moreover, Canadian farmers and consumers both understand the value, benefit and desirability of family farms.

Today, cows are more efficient, and genetics has something to do with it. But let’s not forget all the attention and investments that have been made for the well-being of the cow and her health which also positively affects their productivity. For example, more and more of them are in free stall and/or with access to the outside which means that they have fewer illnesses related to immobility.

It is wrong to believe that the many studies on milk production are only oriented towards cost reduction. Animal health and welfare are also very present and often lead to an increase in production. Simply put, a happy cow is a cow that gives milk.

An independent group of  experts produced a report this year that refuted:

Those that question the quality of milk produced in Canada show a lack of curiosity and basic understanding about world milk production. Best practices have been studied and adopted so that dairy farmers in Canada can guarantee a product that is healthy, safe and for which the well-being of the cow is at the heart of the producers’ concerns. Moreover, all of this is regulated and therefore scrutinized by the Canadian Food Inspection Agency. To suggest otherwise is once again false and misleading to consumers.

Given that too many statements are wrong in the interpretation of the data in the CDC report by the director of the agro-food analysis laboratory at Dalhousie University, the conclusions cannot be taken seriously!

To fabricate malicious intent at the CDC, you must omit important elements of analysis, and make simplistic assumptions without truly understanding the subject at hand. It is the furthest thing from science!

Frankly, one could almost say that there is intentional misinformation circulating on milk price. This again fails consumers and is why our group was founded.